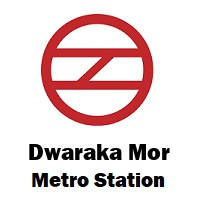 Dwarka Mor station of the Delhi Metro is near the Kakrola Mor. It is also the nearest metro station to Netaji Subhas Institute of Technology and Deen Dayal Upadhyaya College. The station is owned by Delhi Metro and operated by Delhi Metro Rail Corporation. The station structure is elevated to the double track. The station has two track and one side platform. Around 9,253 passengers daily travel from this metro. It is approximately twenty-five kilometres from the New Delhi Railway Station and thirteen kilometres from the Indira Gandhi International Airport. Dwarka Mor metro station is connected by the Delhi Metro to Connaught Place, making it easy for commuters to reach.

Facilities are like Paring, Disabled access, lift, Bank ATM. The preceding station is Nawada and the following station is Dwarka of Dwarka Mor Metro Station.