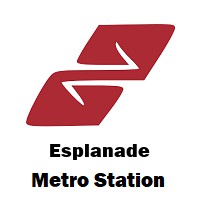 Esplanade Metro Station, Kolkata was first launched on the 24th of October, 1984 and continues to be one of the 24 operational stations comprising the Kolkata Metro. As the name suggests, this station is located in the neighborhood of Esplanade which resides in the heart of Kolkata.

The station has 6 train tracks through which metro trains stop and pass through several times throughout the day. The structure type used is Rapid Transit which enables the accommodation of a large number of passengers.

The station begins its daily activities by 8:00 AM in the morning and shuts down by 9:00 PM at night. For any further queries you can contact the Kolkata Metro Authorities at – 022-2672-8082.