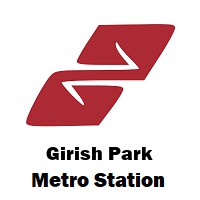 In Kolkata metro, the Girish park metro station is situated on Line 1 of Kolkata Metro . This station was actually opened in 1984 and it also has access for disabled persons. Having the underground double track it has Island platforms.

This station is followed by the Mahatma Gandhi road station and the preceding station is Shobhabazar Sitanuti. The area around this station is also common for the best property rates available under every category, which makes it one of the favorite places for investors and buyers.

The area surrounding the metro station is highly civilized and advanced having most of the amenities like popular hotels, public transport, shopping malls, bank ATMs around Girish park metro station. The most common banks situated around this area are-

The main gate follows by gate number 1 and gate number 2 and gate number 3 leads to Vivekananda road. The station code of this metro station is KGPK. The most amazing thing which you will witness about this station is it is actually located in the old Kolkata so you will not get to see the actual modernization but the beauty around it is Heritage buildings which will amaze you. It is also among the well connected and having a good communication metro station with simple access to the roads. Being the most connected platform it always seems a little bit crowded but you won't be able to trace even a little piece of garbage as it is highly clean.

Following through the exit, the bus number mentioned below shows the route and searches the station coming along the way.