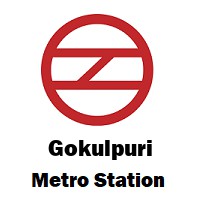 Metro is a word that came into practice in India recently, which has now become a blessing for many people living in cities because of its speed, cost and easy access. Metro is an in-process project throughout our country with a number of metro lines built and many under construction in various states initially. This is being implemented in cities that have a dense population. Metro also has proved to be a great tool in reducing traffic congestion in large cities.

Metro rails are accessed by people at the metro station. There are nearly 15 to 20 metro stations built in each and every city where the metro is being brought into function. A metro station is featured with huge pillars, well-furnished floorings, with a number of staircases, good lighting facilities, escalators, are well air-conditioned and totally kept under CCTV surveillance for the safety of the public.

Since the area of Gokulpuri has a large number of spare parts shops, this station is mainly used by the businessmen who own shops in that area and also traders who come for purchase saving their time and having frequent trains to market areas, airports, railway station and other important places of the city.