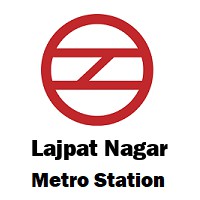 Lajpat Nagar Metro station is one station of the Delhi Metro who located between violet Line and pink line of Delhi Metro. It is located between Jangpura and Moolchand on the Violet line in Lajpatnagar. Lajpat Nagar metro station is nearby Lajpatnagar. The station was opened with the first section of the violet line on 3 October 2010, in time for the commonwealth games opening ceremony on the same day. It becomes an interchange station with the opening of the pink line on 3 August 2018. The station on the pink line is underground, whereas violet line station is elevated. However, both the lines are seamlessly connected without the commuters having no exit the ticketed area to change from one line to another. The location of this station is Lala Lajpat Rai Marg New Delhi 110024 India.

The station is owned by Delhi Metro and controlled by Delhi Metro Rail Corporation (DMRC). There are four Platforms. One is Escort Mujesar, second is Kashmere Gate via Lal Quila, Third is Shiv Vihar and Last fourth is Majlis Park. There are four tracks in this station. And Platform levels are two. The structure of this station is underground, elevated. The station code LJPN.

There are three entry/exit gates.

The Station Provides Many Facilities Like Lifts, Drinking water Parking Area. The Lajpatnagar Metro Station has facilities that accommodate the needs of a disabled individual in order to impart a comfortable experience. Thes stations infrastructure will all basic and modern facilities inside, good maintenance and near to central suburban trains and park town station. And the nearby station has Bank ATMs acceptance facility name of banks are HDFC Bank SBI, RBL banks.