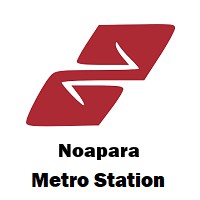 Metro station or a subway, a frequent transit system has all such assistance for purchasing a ticket, board trains and evacuate the system at times of emergency. Each and every location of the Naopara metro route has been carefully planned and well evaluated for the easy of the passengers or travelers.

The careful evaluation is to provide easy access to any important urban centers of the city. The said important urban facilities include roads, commercial centers, major buildings, and other transport facilities. You are provided with all such assistance which will make your journey a pleasant one.

The Noapara Metro station is actually the latest and also the biggest station of the Kolkata metro. The metro station is located at Noapara, Baranagar. The commencement of the station is dated as on 10 July 2013 but with the obligation and provision of limited facilities.

The facilities provided comprises of four platforms. The length of the station is approximately 182 meters which is not like most of the other Kolkata Metro Stations.

The Noapara metro station is well build to serve all the communities of Baranagar, Sinthee, Tobin Road, Dum Dum Cantonment and Durganagar. The other facilities of the station comprise of a number of other provisions such as, it has 2 stories, there are a total of 6 escalators for the ease of boarding the trains along with 4 other elevators.

The metro station’s security has as well not been compromised. Keeping into view the increasing security concerns, a number of 31 CCTV cameras have been set up at different parts of the stations. In addition, this Noapara metro station has a 147-acre Car shed which is preserved for the storage as well as maintenance of rakes. The shed is located at the east of the station, the right to cater for.