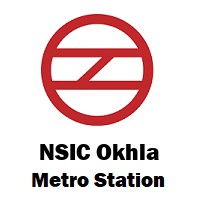 The NSIC Okhla Metro Station is situated on the Magenta Line of Delhi Metro. The station address is Okhla phase III Kalkaji New Delhi 110020. The station was established on 25 December 2017 for the commuters. The Full form of NSIC is (National Small Industries Corporation Ltd) it's near from the station.

The station is owned by Delhi Metro and controlled by Delhi Metro Rail Corporation. The station has an elevated structure and two-track with a side platform. The Okhla Railway station of Indian railway is nearby at the station. The Facilities are like Bank ATM( Canara Bank, Central Bank of India, HDFC Bank, Panjab National Bank), Disabled access for Handicap peoples, Parking at a suitable cost, Lifts and Escalators for needed peoples. The preceding station is KalKaji Mandir and the following station is Sukhdev Vihar of NSIC Okhla Metro Station.