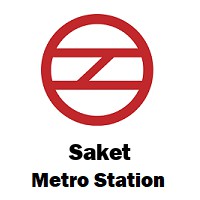 It is situated on Mehrauli-Badarpur Road in Saided Ul Ajaib near Sake, It serves the southern parts of Saket including Golf Green, while the Malviya Nagar Station is closer to some houses in block A, B, C, D and G and near the Garden of Five Sense.