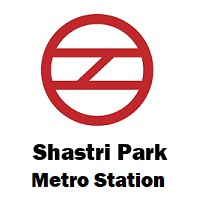 Due to the introduction of the Metro in Delhi, the transportation system of Delhi has somehow changed a lot. There are lots of people in Delhi who have been preferring using the metro trains instead of the road for going to the office. They do not prefer road transportation due to heavy traffic. One of the best advantages of the metro railway of Delhi is that due to the introduction of the metro station the population on the road of Delhi has decreased.

The following gates will lead you to a different area when you are going to Shashtri Park metro station and they are:

You will also get the bus no 982 that is from Seemapuri to Sultanpuri.

There are several Metro stations that come in the red line at Delhi and they are:

The following are the places that you can go while you are visiting Shashtri park and they are:

The Shastri Park Metro station is quite neat and clean. The cost of the journey through metro trains is quite affordable and within a short time, you will also reach your destination as compared to going by road. As it is noted by the government that within 2021 the Delhi metro railway will be covered to almost every area of the Delhi. You will get lost of facilities at Shastri Park Metro station and you can also enjoy the scenic beauty of Delhi while you are traveling via the metro. This makes the Delhi metro one of the best modes of transportation.