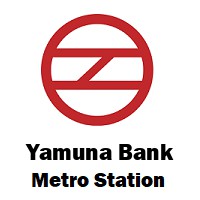 The Yamuna Bank Metro Station Metro is located on the blue line of the Delhi Metro. The station transfer point between the Noida and Vaishali branches of the blue line. The cross-platform transfer is provided in the same direction of travel through two Island Platform. The station address is Yamuna Bank, New Delhi, Delhi 110092. The station was established on 10 May 2009.

The DMRC  has also built very large parking at Yamuna Bank which can accommodate up to 400 cars over can an area spreading over 5,200 sq. mts which will also be operational from 10th May onwards, thus, enabling people from adjoining areas to park their vehicles at Yamuna Bank to take the Metro. Lift, Disabled access facility is also available at this station.