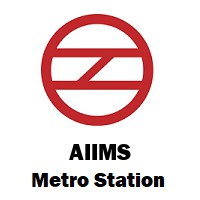 The AIIMS Metro Station is a station situated on the yellow line of Delhi Metro. The station address is Sri Aurobindo Marg, Ansari Nagar East New Delhi 110029. the station was inaugurated on 3 September 2010. The entrances are on Aurobindo Marg, the east side just outside the All India Institute of Medical Sciences. Safdarjung Hospital is just west of the station. AIIMS Metro station names on AIIMS.