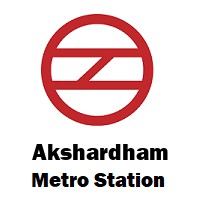 The station address is Noida link Rd, Patparganj, New Delhi, Delhi 110092. The station is owned by Delhi Metro. The station structure is elevated and the code is ASDM. The station has two track and one side platform. The number of passengers 17,076 daily travel from this station. Facilities are like Bank ATM(Yes Bank, Panjab National Bank, HDFC Bank), Disabled access, Parking. The preceding station is Mayur Vihar-1 and the following station is Yamuna Bank of the Akshardham Metro Station.