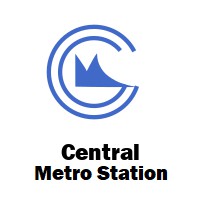 The central metro station is an underground two-level metro station. It is situated on Poonamalle High road in front of the Ripon Building. This station is one of two metro stations where corridor I (Airport Washermanpet) of the project will interest corridor II ( Chennai Central-ST Thomas Mount via Egmore and CMBT) the other being the Alandur Metro Station. The station being constructed at a depth 25 m will be the largest of all metro stations in the city with an area of over 70,000 sqm. The three-level metro station will cover a length of 410 meters and will have a width of 35 meters. Unlike other metro station which have four entry points. The central metro station will have six entry /exits point for access Park suburban and PARK TOWN MRTS Station, Ripon Building, Rajiv Gandhi Government Hospital, and the Chennai railway station. The station will act as a transit point for passengers from the Chennai Central, Park Town and Park Railway station. It is estimated that more than 10,000 communter will use this station daily.

The station is one of the few in the corridor that provides parking facilities. Space will be allocated parking in a basement area for about 500 cars and 10,000 two-wheelers. There are also plans to have an airport check-in facility in one of the basement levels at the station, which allows in air passengers will complete check-in procedures at the station itself. A bus bay has also been planned opposite the station. Well maintained and have separate entries for physically disabled people. Excellent infrastructure will all the basic and modern facilities inside. Good maintenance and near to central suburban trains and Park Town Station.

The station is one of three stations in the Chennai metro Railway network that will have 230 - KV receiving Sub-stations for power supply from the state's electricity grid. The other two are Koyambedu and Alandur. The station has a daily footfall of about 7,700 passengers.

The Chennai Corporation plans to develop to parks over Chennai Metro station. Chennai Metro Rail Limited has agreed to a proposal by the Chennai cooperation of extending the Ripon building over the Chennai Central underground Metro Station. The waterproof structure will be created over the facilitate creation of the park. Which will cover more than six areas of the premises Ripon building and Victoria public Hall, will be developed on a waterproof concrete Slab area, 210 meters by 10 meters. Visitors to the Ripon Building Park, Amma Maligai and Victoria public hall will be access to the Chennai Metro station through some its seven entry points.