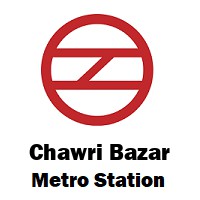 In any metropolitan city like Delhi, people are benefited by many modern facilities. Nowadays, the transport system becoming better day by data everywhere. So it is quite obvious that the capital of our country, Delhi, must have some great facilities. Quite a few years back, Metro rail came to our country. In a busy city like Delhi, people always search for a good transport system. Although metro rail was nothing new to Delhi, as the population of Delhi was increasing day by day, the government thought to expand the metro rail service. As a result, in 2005, Delhi decked itself up with a new metro station, which is the Chawri Bazar Metro Station. It came to service from 3 July 2005.

Like most of the other metro stations. It is also an underground Metro station. It is part of yellow line Metro Rail Service of Delhi. It is located in Ajmere Gate Road, Chawari Bazar, Hauz Qazi Old Delhi 110006 in the Chawri Baazar locality of the old district. Chawri Bazaar is a second deepest metro station and is situated about 30 meters(98 feet)below ground level. The station is owned by Delhi Metro and controlled by Delhi Metro Rail Corporation.

Facilities are like Parking, Bank ATMs, Lift, Disabled access. Around 939,508 passenger travel from this station. Jama Masjid and Red Fort are nearest to the station. The preceding station Chandni Chowk and the following station is New Delhi of the Chawri Bazar Metro Station.