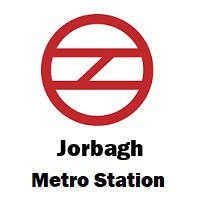 The Jorbagh Metro Station is located on the Yellow line of Delhi Metro. It is the northern-most station on Aurobindo Marg and is located near the Lodhi Road crossing. A Mughal mausoleum, Safdarjung's Tomb, is located nearby. It is also close to Safdarjung Airport. The station was opened on 3 September 2010.