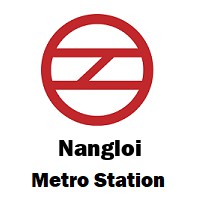 Nangloi Jat or popularly known as "Nangloi" is locality in West District Delhi in the Union Territory of Delhi in India. National Highway 10 (Rohtak Road) runs through Nangloi. It is connected to the Green line of the Delhi Metro. Nangloi Metro Station is a Station on the green line of Delhi Metro it is situated on West Delhi District. The location of this station is Kirari Extension 2, JJ Colony No 1, Nangloi New Delhi 110041. It is elevated and was opened on 2 April 2010.

Nangloi Metro Station is owned by Delhi Metro. There are 14,987 passengers per day travel from this station. Facilities are like Parking Disabled access, Bank ATM. The preceding station is Maharaja Surajmal and the following station is Nangloi railway station of Nangoli Metro Station.