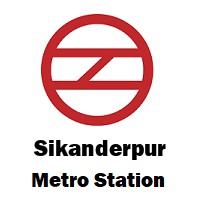 Places to visit near by Sikanderpur Metro Station

The Sikandarpur Metro Station is a station on the yellow line of Delhi Metro and since November 2013, act as an interchange station for a rapid metro. This interchange station sees a large crowd 3,00,000 to 5,00,000 daily going to office and important place this line. It benefits for commuters who previously reached this place by auto and bus.

The station address is Block A, DLF Phase 1, Sector 28, Gurugram, Uttar Pradesh 122022. The station was established on 21 June 2010. The station structure is elevated and the station has four tracks with one  Side Platform. The station is owned by Delhi Metro and controlled by Delhi Metro Rail Corporation. Facilities are like Bank ATM(State Bank of India, HDFC Bank, Canara Bank, RBL Bank), Parking, lift Disabled access.