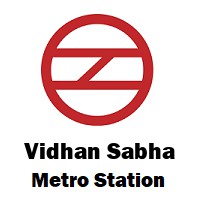 In any metropolitan city like Delhi, people are benefited with many modern facilities. Nowadays, the transport system is becoming better day by day everywhere. So it is quite obvious that the capital of our country, Delhi, must have some great facilities. Quite a few years back, Metro rail came to our country. In a busy city like Delhi, people always search for a good transport system. Although metro rail was nothing new to Delhi, as the population of Delhi was increasing day by day, the government thought to expand the metro rail service. As a result, in 2004, Delhi decked itself up with a new metro station, which is the Vidhan Sabha metro station. It came into service from 20th January 2004.

The northern part and southern part of Delhi, outer Delhi, and central Delhi all are under this line of metro rail service. This line is one of the rapid transport systems. So, Vidhan Sabha metro station is also really important to the citizen of Delhi. This metro station is exactly located in the Mahatma Gandhi Road, Khyber Pass, Civil Line in New Delhi. This metro station covers the area from Rajiv Chowk to Vidhan Sabha. It gives service around the Delhi Legislative Assembly and Majnu Ka Tilla. There are a total of seven stations from Rajiv Chowk to Vidhan Sabha, which are: