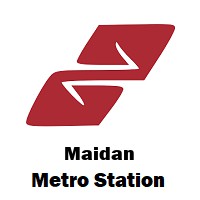 This Metro Station was first inaugurated 34 years ago on the 24th of October in the year 1984. The Metro Station is built underground and has two train tracks that are laid down opposite to each other.

There are also several bus routes that you can avail from anywhere in Kolkata to reach the Metro Station in Midleton St. Hence, you would not face any kind of problems concerning transport and communication while commuting from the Maidan Metro Station to your destination.

The station begins its daily activities by 9:30 AM in the Morning and shuts down its operations by 6:30 PM in the evening. You can contact the Kolkata Metro Authorities to find out more about the Metro Station services at – 033-22261593.