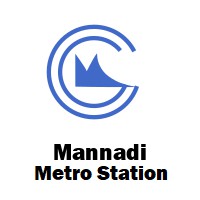 In this year Government conduct many works for improverment in countries. The government made many bridges, Highways and Metro Stations .Mannadi METRO Station is one of them which was opened for public transportation on 10 Feb 2019. Mannadi metro station is a metro station on the blue line of the Chennai METRO. It is an underground metro station which layout is of Island type. This metro station is operated by Chennai Metro Rail limited. The station serves the neighbourhood of Mannadi and Geroj Town area. The station located in Mannadi police colony George town, Chennai Tamil Nadu 600001. There are two tracks in this station. The structure of this station is underground Double track. The parking facility is  available on this station. This metro station is facilitated with Disable access and electrified with single phase 25kv5p hzAc through Overhead Catenary.

The main contractor of Mannadi Metro station is L&T-SUCG JV.

Name of some famous Temples is near Mannadi Metro station

The ATMs are available like ICIC Bank, HDFC Bank, Bank of India etc.