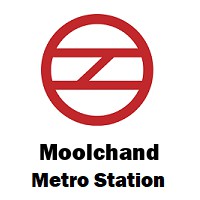 According Delhi Metro official for traveling many plans conduct like Flyover, Brides, Air Lines, Metro stations. In these facilities are achieve own goals. With the help of these plans Economy growth, Employment generates and increases the beauty of India. Moolchand Metro Station is a Delhi Metro station in Delhi is situated on the Violet line. It is Located between Lajpat Nagar and Kailash Colony Stations on the violet Lines. The Station was opened with the first section of the Line 3 October 2010 in the time of commonwealth games opening ceremony on the same day

Moolchand Metro station is situated on Lala Lajpat Rai Marg New Delhi 110024 India. The station is owned by Delhi Metro and the structure of this station is Elevated. There are two side Platforms one is Escort Musjesar and the second is Kashmere Gate via Lal Quila. The station has two tracks. The station Code is MLCD.

The station has two entry/Exit Gates :