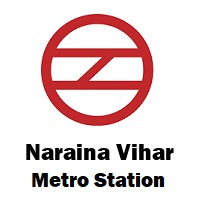 Naraina Vihar metro station has island type of platforms. An island platform, also known as center platform, is a type of platform in which a single platform is placed between any two adjacent tracks within a station. It is an underground, double track type of station. Since this is an underground type of station; it measures up to only 19.11 km in length. It is owned by Delhi metro and operated by DMRC (Delhi Metro Rail Corporation).

The two platforms that it possesses are:

So, there are only two tracks.

Naraina Vihar metro station provides facilities to the disabled people as well. It also has sitting arrangements to wait for the metro. The entire station is staffed and operational. It has various

Each station of the metro possesses cameras to avoid any mishaps to occur. The token rates of the metro are reasonable i.e. 50 Rs per person and also gives a concession of 10 Rs to the people on national holidays and Sundays. It has no facility for parking. The trains are electrified and use 25 kV 50 Hz AC as a source to move. Naraina Vihar metro station has only two entry and exit points/ gates. As soon as one exits out of the station, there are many autos available for the passengers.