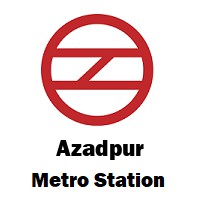 Azadpur metro station is one of the major stations of the Delhi metro. This metro station was built in the year of 2009 that is almost 10 years ago. It is a known fact that there exist a number of lines dividing the Delhi Metro, namely the yellow, blue, violet line, etc. The Azadpur line interchanges between the yellow line and the pink line. From the Southbound of Azadpur is the Huda City Center and that of the Northbound is Samaypur Badli.

The Azadpur metro station is an overhead station and has great emphasis on neatness and cleanliness. The prices of the tokens at the metro station in Delhi are pretty much affordable. One can travel easily anywhere in Delhi by using the metro trains avoiding the traffic to block the way. One of the best things about the metro trains is that while you are traveling you can also enjoy the beauty of Delhi.

Nearby areas of Azadpur

This metro station is operated by the Delhi Metro Corporation. In the layout of the Azadpur metro station, you will also get the fare control, station agent and Metro card vending machine. This station seems to be crowded at the peak during the office hours but the metro still stands to be the best way to reach the office at the earliest. All the metro trains in Delhi are air-conditioned to make it comfortable and help the passengers enjoy the ride.

The following are some of the gates to pass through in Azadpur metro station: