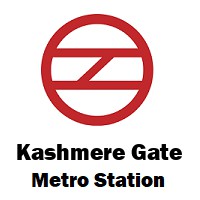 There are 6 Platforms on Kashmere gate metro. Each line consists of two platforms-

The red line was inaugurated on 25th December 2002, the yellow line on 20th December 2004, and the violet line was inaugurated recently on 28th May 2017. Redline is the only one with an elevated level kind of structure whereas both yellow and violet lines are the underground and elevated level kind of structures. Each line has its own parking space available.

Kashmiri Gate metro station is currently the largest metro station with the area coverage of about 118,400 square feet (more than double the size of Rajiv Chowk Station). It is the only metro station in India with the facility to interchange between three lines. This station comprises of 6 floors. It consists of all the facilities like restaurants, fast food centers, water, and ticket vending machines, 3 toilet complexes, over 35 escalators, shopping area, etc.

The Kashmere Gate metro station allows passengers to commute between the stations of Escorts Mujesar and Jama Masjid, Dilshad Garden and Rithala, and the stations of Huda City Centre and Samaypur Badli. The station also is the very first model of the Multi-Modal Integration in Delhi. There are as many as eight entries and exit points to make it accessible from all the points. Each point has its own bicycle stand and also a dedicated area for other public transport via road. The passengers will have direct access to autos and buses from the exit gate of the station.

DMRC (Delhi Metro Rail Corporation) in association with the DTIDC (Delhi Transport Infrastructure Development Corporation Limited) plans and looks forward to connecting the metro station to the Kashmere Gate ISBT (Inter-State Bus Terminal). The connection is planned to be in such a way that the passengers could avail the direct services from the metro station to reach the first floor of the ISBT.

According to the rule by DMRC, no auto driver will be allowed to park the vehicle anywhere around for the lookout for the passengers. The auto drivers are expected to carry the passengers on the first come first serve basis and will not be allowed to refuse the passengers. All the sides of the stations are being planned to have their own food courts, kiosks, hawker zones, and special sitting areas. Also, three sets of public toilets are being planned to be installed at the different locations of the station.

The station presently has three bus stands around it where the buses are being parked resulting in the major traffic jam. DMRC, in the future, plans to merge them into a single station with added services and amenities. Subways planned to be built would be open to the visitors too to facilitate them to cross Lala Hardev Singh Marg, and would not be restricted only to the passengers.

Kashmiri Gate metro station is one of the largest and one of the most successful projects under the Metro Corporation of Delhi.