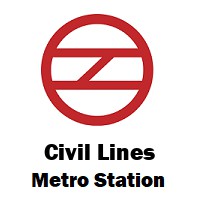 The Delhi Metro is the busiest and the second oldest metro in India, the oldest being the Kolkata Metro. Connecting the cities of Bahadurgarh, Gurugram, Ghaziabad, Noida, Faridabad through around 250 metro stations; it consists of 8 color-coded metro lines. A mix of elevated stations, at-grade stations as well as the underground stations form the basic structure of Delhi Metro.

It has an annual ridership of around 926 million with the daily ridership of around 2.54 million. The headquarters of the Delhi Metro is Metro Bhawan, Barakhamba Road, New Delhi-110001. The Chairman Durga Shanker Mishra and the Managing Director Mangu Singh have been successful in the biggest metro project of India. The complete system length is of 343.36 km. 300 trains with 4/6/8 coaches each are engaged in taking this project towards the mark of success. Among the 250 stations which have been talked about already, there exist Civil Lines Metro Station at Sham Nath Marg, Railway Colony, Civil Lines, New Delhi.

One can contact the station at the numbers 8800793128, 011- 23988828, the calls will be answered irrespective of how busy the station is. The metros are time-bound and in most of the cases, doesn’t let the passengers wait. The timings for some of the trains are given below:

Being at Civil Lines Metro Station, if you want to change for Redline or Blue line, take a train towards Huda City Centre and reach the station Kashmiri Gate. Kashmiri Gate connects the yellow line to the red and the blue line. For the Pink line, reach the station Azadpur, which is towards Samayapur Badli. It connects the yellow line with the Pink line.