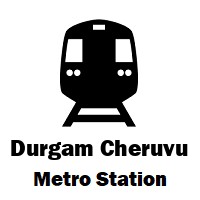 For sustainable development of Hyderabad, a global city. wherein an efficient public transport system is indispensable, our Hyderabad Metro Rail, which envisages three corridors across the city, is touted to be an ideal solution.

Durgam Metro station lies on the corridor three connecting Nagole towards one corner of the city with Shilparamam, in the hearth of Cyberabad. The station is situated on the blue line and opend on 20 March 2019. The station address is Hitech City Road, Sri Sai Nagar Madhapur Hyderabad Telangana 500081. Owing to its proximity to a tourist attraction called Durgam Cheruvu, our metro station is poised to not only serve as an important station on this corridor but also as a hub for tourist who intends to visit the water body, popularly known as Secret Lake.

The station is owned by Hyderabad Metro and controlled by Hyderabad Metro Rail Corporation. The station structure is elevated. It has two track and one platform. This Metro is offering a reliable, safe and ultramodern transport which is rapid and efficient. The station is facilitated with retail space at the Metro station offers much scope for outlets like Ice cream Parlor, Laundry store, grocery store, bookstore, gift shops, Bank ATM, Disabled access, Parking, Lift and many more. The preceding station is Madhapur Metro station and the following station is Hitech City Metro Station of Durgam Cheruvu Metro Station.