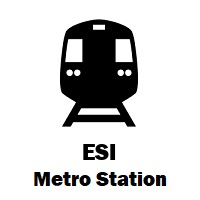 On the Red Line, Hyderabad Metro stations, ESI Metro Station is one of them who located at opposite ESI bus stop Sanat Nagar Erragadda, Hyderabad Telangana 500038. The station was opened on 14 March 2018for the public.