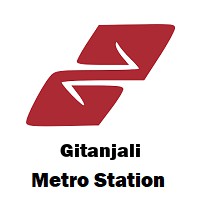 It is the fourth last stop in the north-south corridor. Gitanjali Metro Station, as the name itself suggests, is named after the book, Gitanjali, a collection of 103 English poems by the Bengal-born, Nobel laureate Rabindranath Tagore and was established on 22nd August 2009 by the Kolkata Metro.

The Gitanjali Metro Station is located on Netaji Subhash Chandra Bose Road which is an important thoroughfare in South Kolkata. It is one of the busiest metro stations of the city with thousands of passengers traveling from it every day, given the importance of the road on which it is located.

It is an important metro station especially for students who travel to the various schools and institutes including Sri Aurobindo Institute of Culture, The Indrapuri Film Studios and Naktala High School located on the Netaji Subhash Chandra Bose road.

It is a safe means of transport with due care taken in maintaining the cleanliness by the Kolkata Metro authority. The biggest advantage which the metro stations offer to the people is the low fares of traveling.

The tickets are as low as Rs. 5 and go up to only Rs. 25 depending upon your final destination which is lower than almost all other modes of transport. This is especially helpful for the students, who are the primary users of this station. This along with the flexible train timings makes it an even preferable mode of transport.