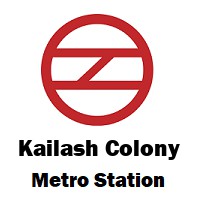 Kailash Colony Metro Staton was incorporated in the year 2010, exactly on the 3 October of the year. Making this station more than 9 years old. It is located between Moolchand and Nehru Place station on the violet line. Kailash Colony is yet another station of the Delhi Metro Station and the precise address of the station is Lala Lajpat Rai Road, Block A, Kailash Colony, New Delhi 110048.

It is entirely owned by the Delhi Metro has been operated since its emergence, serving all the people of Delhi, acting as a great yet easy mode of transport in the densely populated city of joy. ts very helpful for student and Poor peoples because of its saving money, reduction of waste time.

The Platform is referred to as the Side Platform which structures in the elevated rapid transit type. The Metro is actually situated in the South line of Delhi Metro line. The Station has facilities are provided t regular passengers are like lift, drinking water, Parking, CCTV Camera.

The famous Spot around the station are of the diverse range including like the Moth ki Masjid, Jain Temple, India Gate, Red Fort, Kingdom of Dreams, Lodhi Garden Garden of Five Sense, Mughal Gardens Railway Museum, National Science centre, Birla Mandir, Nehru Planetarium, Gandhi Smriti Badkhal Lake etc The list comprises all the places sightseeing if you are not the regular traveller and are travelling for fun.

The Preceding station is Mollchand Metro station and the next station Nehru Place Metro Station. The First timing of train is 5:19 AM and the Last train timing is 23:27 PM. The Many bank ATMs facilities are available like YES Bank ATMs, Canara Bank ATMs, oriental Bank ATMs. The contact number is 8800793223, Landline no – 7290055035. if you have any problem. Soo calls these numbers.

There are eight Entry/Exit Gates in this station.

7)Gate no 7 For -Regal Cinemas