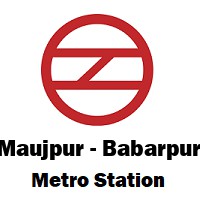 On this station, you will find many other metro stations that are nearest it and they are:

This is the newest metro station that is built in New Delhi by the Delhi Metro Corporation. The fare of the metro station always depends upon where the person is starting the journey to the person’s metro destination. Nowadays in Delhi, people prefer to travel in the metro as compared to traveling in vehicles like cars, bikes, and buses. This is because people can reach their destination within a short time duration if they are traveling in metro trains.

Firstly, the pink line was opened on 14 March 2018. This section was started between Majlis Park to the Durgabai South Campus. In that year, another pink line section was started between Durgabai Deshmukh South Campus to the Lajpat Nagar which was opened on the year of 6th August 2018. After that Shiv Bihar to Trilokpuri was opened. After this, many other Delhi metro stations are opened but some of them are still now not so much functional. The main target of the Delhi Metro is to extend its reach all the areas of Delhi. Maujpur- Babarpur metro station is really very beautiful and it is an overhead metro station.