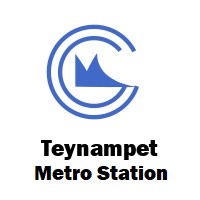 The Theyampet Metro The station is not just another mode of intra-city commute but an integral part of the life of people of this city. It is a part of daily hustle to earn their livelihood and make something out of themselves and even acts as a great source and facilitator of employment.

Evidently, it got it the same from the neighborhood of Teynampet and T Nagar.It is an elevated Metro Station with two platform and underground double track. The station is operated by Chennai Metro Rail Limited. The station has a length of 230 to 250 meters. The station contractor name is L&T-SUCG JV. ATMs are available in this Station.

The passenger from an attraction like Kamakshi Amman Temple, AGS Cinemas, Chennai Gurudwara commute through the metro station due to close proximity. It is usually very crowded station, but it helps in diverting traffic from the roads as it is located underground. There are four entry/exit gates in this station.

The station has disabled access as well which allows people with special needs to travel as well. It operates from 7:00 am to 1:00 PM. Each day Monday to Saturday and 10: AM to 10 PM On Sunday like all of the other stations of Chennai underground metro network, with hundred peoples, depending on their commute.