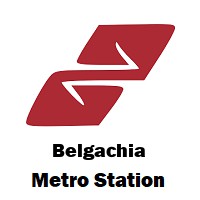 Metro or a subway station is the best means of traveling in the new era. Railway stations are very difficult to use for short distances and for regular use.

This is when metros have come into existence and this is where lives get easier. The metro trains provide all such provisions for purchasing tickets, boarding trains and evacuating the metro system whenever the need arises. These metros stations are set up at most of the important parts of the area to provide ease of travel.

Bus route number 3D/1, AC40, C11, RT1, RT11, RT12/1, S48, T8 serve the station. This metro station commenced in 1984 and 1995 and has been electrified with 750V DC Third Rail. The station’s code reads KBEL. There are a total number of 2 platform levels available in the metros. You will find all such great and easy provisions provided by the metro station which will fulfill all your needs with up to the mark experience.

This Belgachia Metro Station has a number of 3 exists which named gate no. 1, gate no. 2 and gate no. 3 each. The infrastructure of the station is as well taken into great consideration with the good amount of sanitation facilities along with the required security.

You are sure to have a great experience opting for this mode of travel via Belgachia Metro Station.