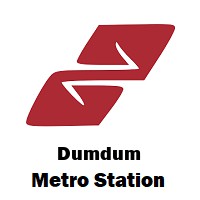 Metros or subways have come up to ease the process of traveling. You will be reaching your destination in no time. Also, the experiences you are bound to feel have been made the best with the provision of everything you are in need of.

You will be provided with every such assistance such as purchasing tickets, boarding trains, and evacuating system when essentially required. All the routes of the train have been carefully marked which is bound to fulfill all your traveling needs.

This elevated station has been made at the Kolkata Metro Line 1 of Kolkata Metro. The Dum Dum metro station also has a number of other provisions and facilities available such as ATM machines are put up at the station which can be used 24/7.

Various connections with every other mode of transport have been facilitated such as auto, bus, rail and lastly air. The connections clearly stated are -

Also, the Dum Dum metro station provides the disabled facility, though lacking at parking and Bicycle facilities. The station is of elevated and double-tracked layout with the station code KDMI.