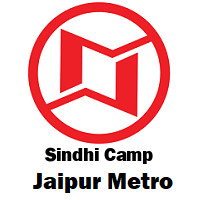 Located on Phase 1 or route 1 of Jaipur railway metro station it is one among the intermediate station. The metro starts from the Mansarovar station and ends at Badi Chaupar traveling a distance of 12.067 km. Among the other eleven intermediates stations, Sindhi camp metro station holds 8th rank in the route following from Mansarovar to Badi Chaupar. Take a follow-up to know about the layout of this metro station