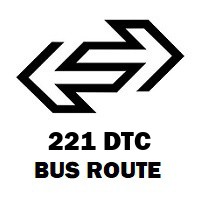 With the increased means of transport our travelling has become easier, now we can easily move from one place to another within the country and outside the country. Delhi being the capital of India is one of the busiest cities in India. Once it was ranked first among the most populated cities of India that’s why to reduce population the DTC buses got introduced. The buses are running on cng which is eco-friendly. It has been seen that people face difficulty in choosing the right number of bus for their destination that’s why we are here mentioning the 221 Bus Route so that you can plan your journey accordingly.

This bus travels a one way trip of 20 kilometres from Mori Gate Terminal to Anand Vihar ISBT and vice versa. During the route of 221 Bus there are a total of seven major stops during the trip. The first bus departs from Mori Gate terminal at 7:02 am and the last bus departs at 9:42 PM for Anand Vihar ISBT. It is always good to have a look over the first and last bus timing so that you won’t miss it. The bus is operated 7 days a week.

Important places or hospitals on the particular route

There are many important places and few hospitals that fall in the route of 221 DTC bus. Let’s have a look over them;

Metro stations that falls within the route are:

This is the list of few metro stations which will fall in the route, if you need to go any of them then you can get off from the bus at a nearby stop.

On the interval of every 10 to 15 minutes, a bus departs from the Mori gate terminal to its destination and the same is applicable for the Anand Vihar ISBT. It is not a very long journey so there are only seven bus stops which are Mori Gate terminal, Shyam Giri mandir, Seelam our, Shahdara, Dilshad Garden GT road, Surya Nagar, Anand Vihar ISBT.

This route chart of 221 DTC bus is going to help you a lot in finding your destination. Be wise and don’t trust any anonymous person, if you are unaware of the routes then it is best to check online and act wisely. You can even download the route in your device for offline view. There is no doubt that transports have reduced our effort and timing in covering any distance whether it is short or long but our safety is in our hands.