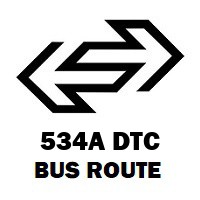 About 534A DTC Bus Service

Every day many buses depart from different places in Delhi to reach their destination from which one is bus number 534a. All buses have their own routes assigned according to their number so that it becomes easy for travellers to know which bus is right for them. If you are going on any new route and have no idea about that then it is always good to get a check on route up. Here, in this post we are sharing the complete time table and stoppages of 534a bus route to ease your efforts.

A brief about the 534a bus route

Important places or hospitals on the particular route

There are many hospitals, monuments, popular places and metro stations that fall on the way. As you are taking the route so you should be aware of all of them. Let’s begin the list:

Metro stations in the route:

As mentioned already there are different departure timings for both first and last bus from both the terminals. So, always take care that you won’t miss the last bus as after that it may be difficult and quite budget effective for you to reach your desired destination. If we talk about the bus stops then there are in total 22 stops on the way that are Anand Vihar ISBT, Hasanpur depot, Balco apartments, Mother Dairy, Pusta X-ing, Road Bridge East, Sarai Kale Khan, Maharani Bagh, Holy Family hospital, Modi flour mills, Nehru place terminal, OS Communication, Sheikh Sarai phase II, Khirki village, Police training school, Kado Sarai, Andheria More, Kishan Garh, Verma Farm, Mahipal Pur, Radisson hotel, IGI Airport terminal II.

So, this was all about the 536a bus route. The journey is going to be around 45 minutes long for the distance of 35 km.